Justin turned 3 months old yesterday.
As you can see, he was very excited... 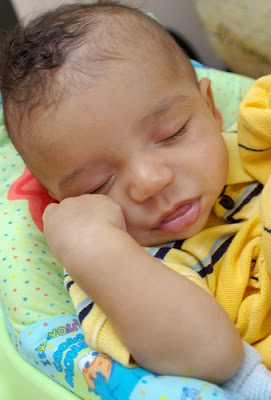 ... for about 5 minutes.
Then he ate and went to sleep.
Some things just don't change.
Posted by avidphotog at 1:48 PM No comments:

Today we finally got gutters installed at the house. 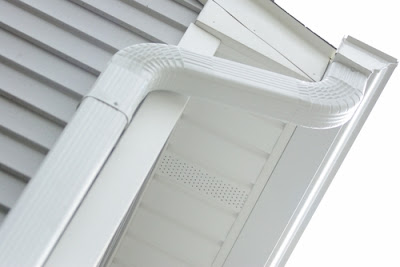 And just like anything else one would buy, I'm ready to test these babies out. Now that the money is spent and we're well-prepared, I don't think I've ever wanted so badly for it to downpour. I'm looking at the Weather Channel with pumped fist like, "Bring it On!"

...which of course means that Hampton Roads will proceed to have a record breaking drought and it will not rain again for 2 years. Unless we relocate. In which case it will rain immediately after we move out of the house.

That's just how these things seem to work. 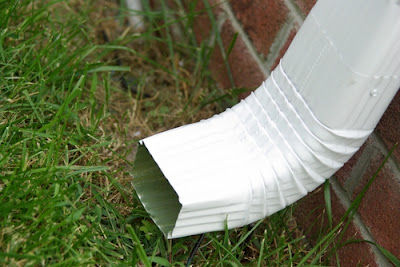 Justin turns 12 weeks old tomorrow; and assuming he gained at least a couple of ounces since last Friday, he should be about 12 pounds even by now. Here are a few other updates (Milestones pt. V) in the world of Justin Alexander. 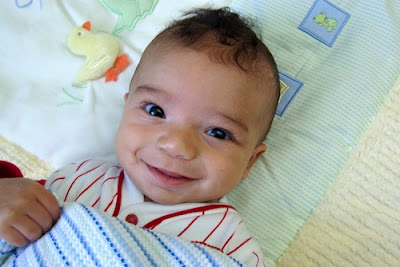 New Virtues
Over the past couple of weeks, I've caught Justin awake and playing in his crib a handful of times. I say caught because I try to pretend that I don't hear or see him, but I do. I'm always worried that if he sees me, he'll go back to his usual ways of begging to be rescued and screaming like his crib is on fire. See, for about the first 9 weeks of his life without fail, the pattern in his crib has been Sleep-Wake-Scream. In fact, the first time I found him in his crib, done with his nap and just laying there smiling, it totally confused me. Prior to then, he'd always wake up hungry, startled or just irritated for who-knows-what reason... which meant instant tantrum... and the tantrum would last until the first drop of milk touched his tongue. But these days the boy is starting to calm and level off quite a bit, which is awesome.

I say all of that to say that his temperament has slowly but surely made dramatic changes over the past few weeks. Yeah, he still cries, but really he whines more than anything. It's as if he now understands when he *really* needs to use his tantrum cry (injuries, discomfort, a Yankees loss, etc) versus when just a little whining will do the trick to get attention. Even when it's feeding time, he is showing a level of patience that was totally absent before. So much so that now it can sometimes be a guessing game as to when he's really hungry since the obvious cues (screaming at full volume, trying to chew and separate fingers from his hand) are starting to disappear. And once it is time to eat, as long as he senses that you're making progress towards feeding him (preparing the bottle, etc), he's cool. But stop for a second and he'll get to squirming and hollering just like the good ol' days. Even still, throughout the day, he just seems so much (dare I say it?) grown up these days.

I guess that's why they say that these times fly by before you know it. It used to seem like an eternity when we were in the midst of one of those arm-chewing tantrums... but now that they're gone, my memories of them are already starting to fade.

Props & Smiles
He also seems to be propping himself up higher and higher every day. I won't be surprised if he gets up and pours himself a cup of Kool-Aid any day now. Nonetheless, 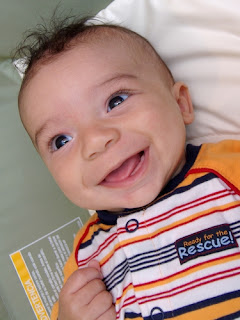 he still has zero interest in crawling, but then he didn't give us any warning for the rollover thing either, so we'll keep an eye on him and see what happens. As for smiling and laughing, still no laugh that we can pinpoint with certainty... but the smiles are constant this point, and (finally) unquestionably voluntary. Even the doctor said that he seems to be just about the happiest baby on the block.

Eat and Sleep
On a different note, he's also decidedly sleeping less in the daytime now, and extending his nighttime sleep every week. The doc said it's okay to let him determine his own feeding times at this point and not wake him to eat anymore. With that, he's been content to take his last feeding somewhere around 6pm (or even as early as 3:45pm like yesterday), and from there he'll sleep until the next day. That's a whole lot of sleep. Mom's freaking out a little bit about the boy going so long without food... but I think she's getting used to it. Plus he ate like a monster this morning when he woke up: 4 ounces at 3:20am, then about 7 ounces
Posted by avidphotog at 8:46 AM 2 comments:

Posted by avidphotog at 11:16 PM No comments: