Charting your child's leaps in maturity is often no different than trying to assess his or her physical growth:  You see them so often that the gradual changes are rarely noticeable.  While that's definitely the case for the physical side of the equation, Jasmine's swings in the realm of behavior and emotional maturation have been so drastic that it would be impossible not to take notice.  To put it plainly, she has come a long way.

Man, it was a push to get through those fours (and threes and twos and...) but if the last six months or so are any indication, then I'm hopeful for five.  Most of the time, a birthday is no more than a highlighted date on the calendar... but I don't think that's the case this time around.   I think that five means something that four didn't. Yes, she is still struggling to find her place (as most middle children do)... and yes, the drama has not ceased.  She's certainly not conflict-free, and her passive aggressive emotionally charged demeanor may never allow her to be pegged in that category.  Yet, I think we've made some leaps and bounds in the right direction.  She's growing up.  And it's awesome.  Here's to maturation and the evolution of strong-willed child.  Happy birthday, Jasmine. 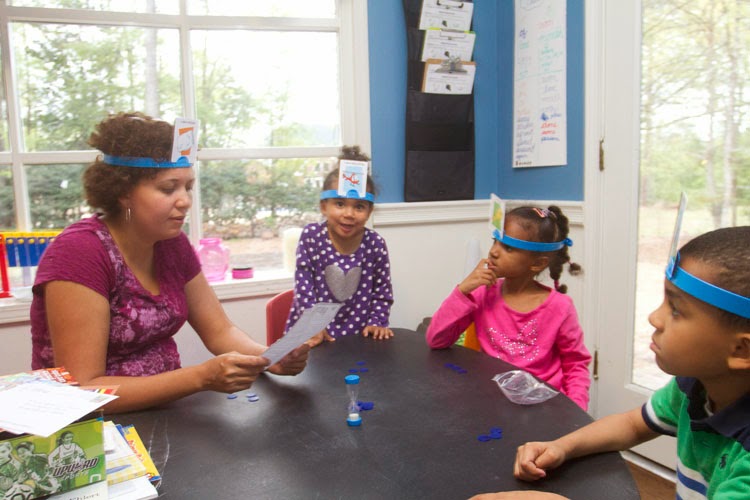 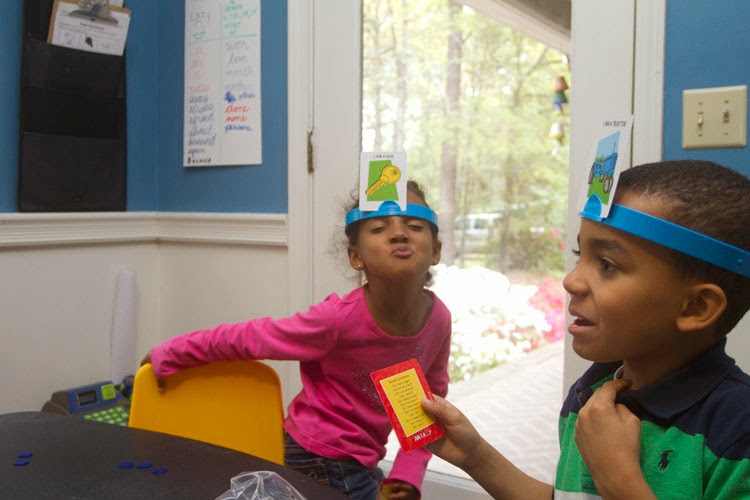 As far as birthday parties go, Jasmine could not be more afraid of Chuck E. Cheese.  In fact, she has never been fond of anyone in a full body costume.  Sheer panic is probably the best way to describe her reaction to such characters... which I guess (on the bright side) rules Disney out for the next five years or so.  But yet, Chuck E. Cheese was top choice once again; and so off we went to drop golden coins and collect paper tickets.  Somehow it never gets old. 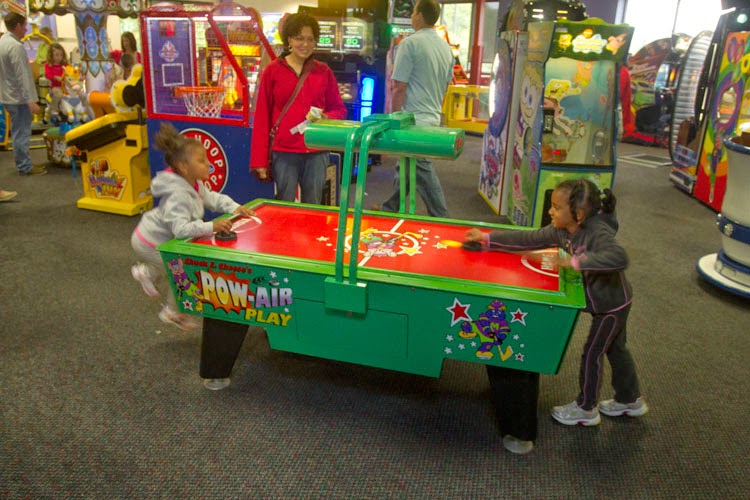 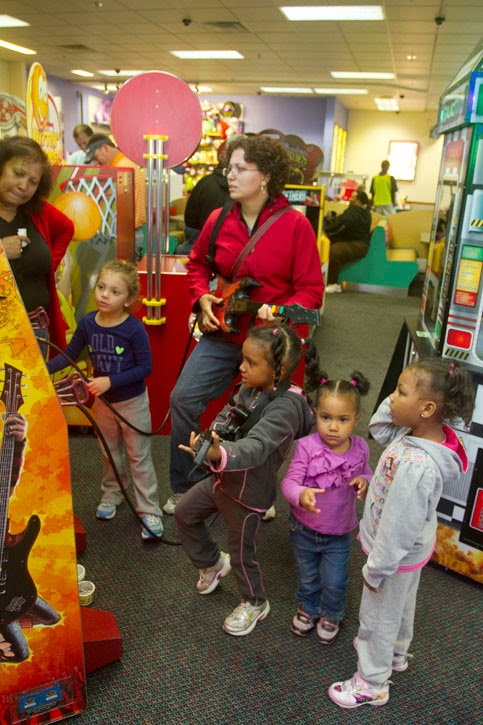 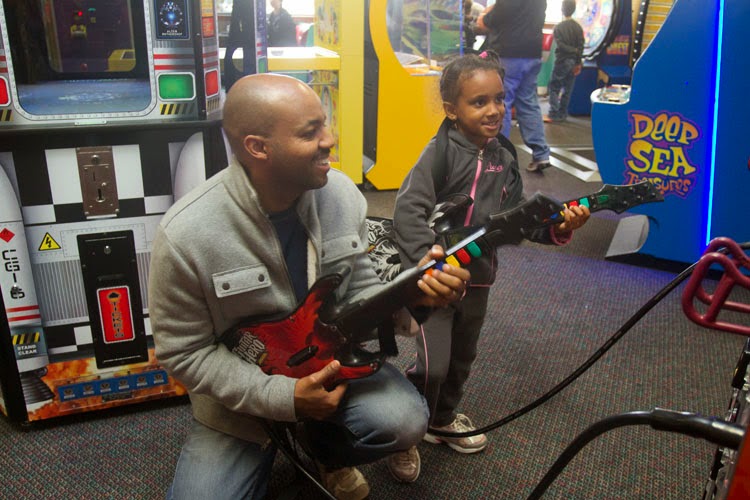 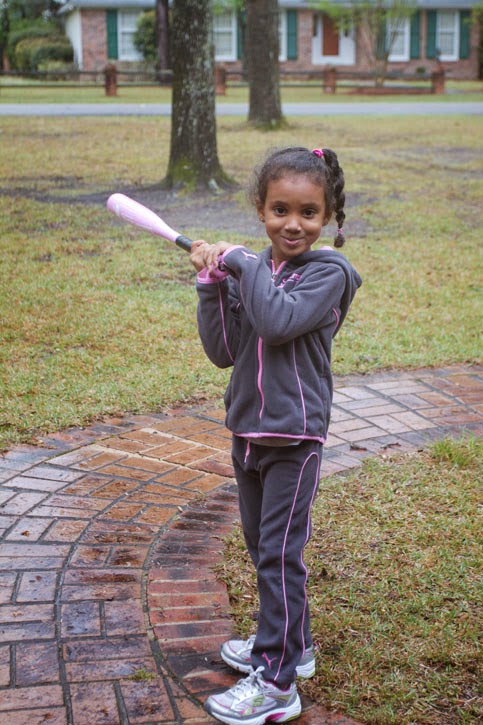 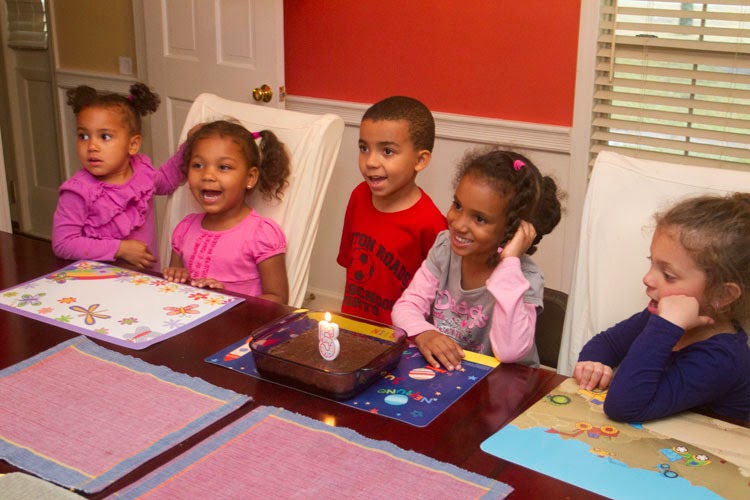 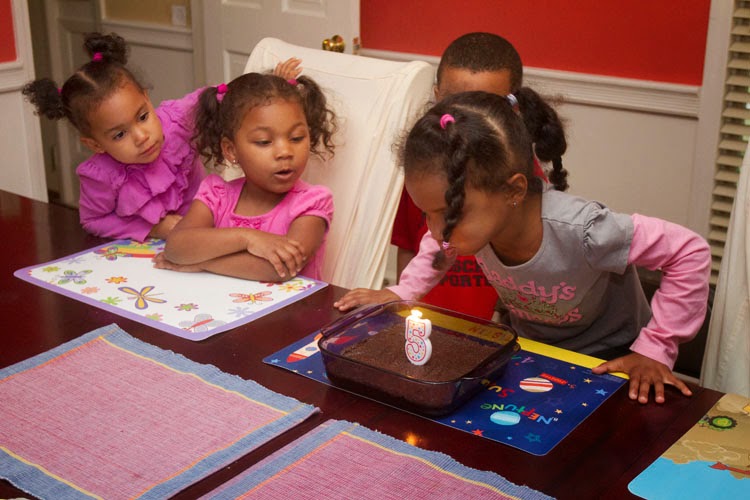 Posted by avidphotog at 11:27 PM No comments: 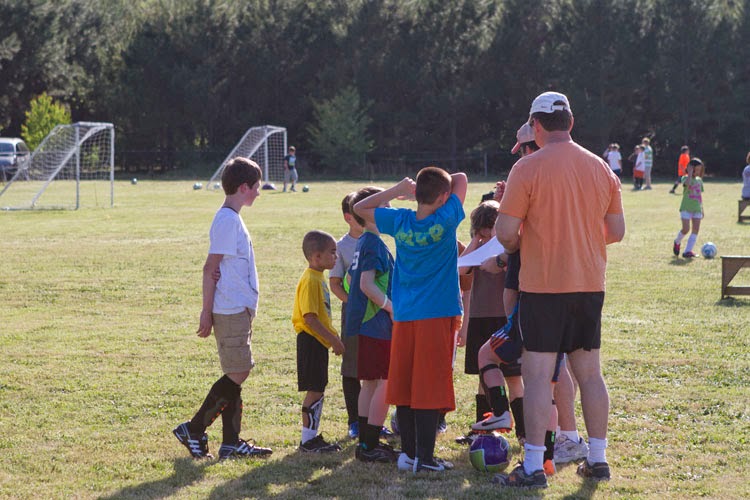 No, he did not wander into the wrong huddle.  And, no we didn't read the sign or the paperwork wrong.  This is really Justin's soccer team.  And with that realization, I spent the rest of the practice terrified... just knowing that this wasn't going to end well.

The way the soccer teams are split up, Justin got slotted for the 1st to 3rd grade group; and so we knew right away that it would be a challenge.  It's no secret that he's small for his age.  On just about every trip to the grocery store, I still get asked if he and Jasmine are twins (no ma'am, they're actually two years apart).   We're not sure where he got the short gene from, and we're also not fully convinced that he won't sprout up at some point (though at this rate, I wouldn't hold my breath).  Either way, the end result is the same:  Justin staying on this soccer team looked like a train wreck in the making. I mean, this is the boy that treats a paper cut like a severed limb.  This... can't... be good.

And so I began to negotiate.  I spoke to coach 1.  I spoke to coach 2.  And I spoke to the director.  And bingo. Hey, Justin... guess what?! You get to play soccer with Jasmine's team.  You know, the same team you scrimmaged with last week.  All of your friends will be there.  Isn't that cool?  And I almost turned and walked away, just assuming he'd be following behind me... until I heard, no thanks.  I rather stay with my team.

And so what could I do?  He wanted to hang with the big boys.  And I couldn't blame him.  Maturity-wise, he had no business with the 4 and 5 year olds (and he knew it).  Even Jasmine ( our ultra-competitive child) looks bored with her team at times.  Granted, there's a good chance that Justin wouldn't even be the tallest kid on Jasmine's team... but stature was the least of his concerns.  The camaraderie of the all-boys team, the excitement of implementing strategy and the competitive fuel that was visibly absent from the mob of toddlers that he scrimmaged with the week before appealed to him.  And so... even though I was still utterly baffled by his decision, I let him stay.  And I held my breath for the next 55 minutes.

In the end, he survived.  And beyond that, he absolutely loved it.  Once practice was over, he was clear to tell me and Venesa a dozen times each that he had a blast.  And so, with the first game scheduled for tomorrow (full speed, full contact, kid gloves thrown to the ground) all I can do now is cheer him on from the sidelines, hide my panic... and keep the car running with the GPS device mapped to the nearest emergency room. This is going to be interesting. Go Hawks. 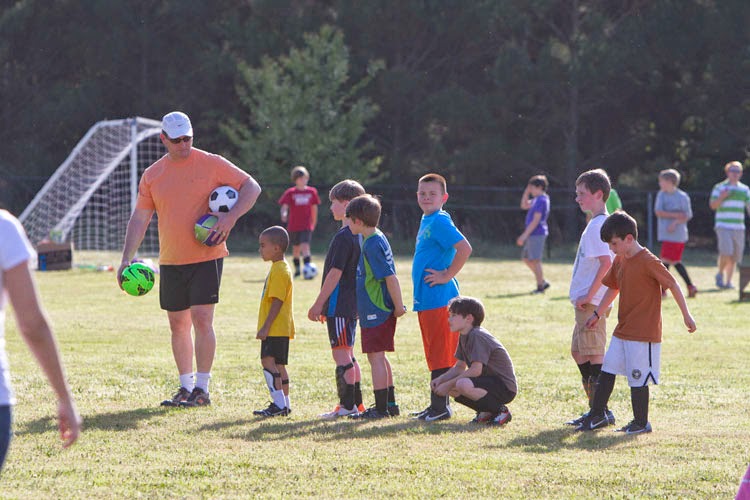 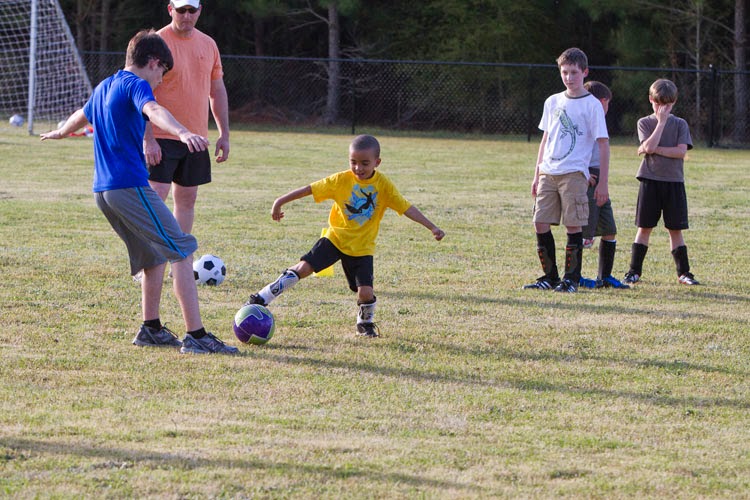 Posted by avidphotog at 10:35 PM No comments:

Justin got his baby teeth later than most kids, so it should not have been shocking that he'd be nearing seven years old before he started to lose them.  What did shock me, however, was that his permanent teeth had no intentions of waiting around for the baby ones to get out of the way.  So I'm brushing his teeth one day (yes... we still brush his teeth on occasion... It's hard to imagine what it would look and smell like in there if we didn't)... and bam, there was a tooth behind his tooth.  Honestly, I hadn't felt that level of parental panic in a long time (that's the one part of having infants I don't miss... the constant anxiety of new parenting).  He saw it on my face, and asked what's the matter?  "Oh nothing... daddy just remembered something."  Yes, a blatant lie... but the alternative was to say, "Look in the mirror... you look like a monster from sesame street!"  I didn't want my ignorance to freak him out... so I, um (ahem) pretended.  However, I do think I set a record for how fast I got him in the bed, got downstairs and hit the google search button.  And the verdict... Shark teeth. If you want to see some disturbing pictures of kiddy mouths... google it and hit the image button.  The bottom line, however, was that (the three words every anxious parent loves to hear) it's not uncommon.  He wasn't going to die, nor was he going to start to eat his siblings... but it did mean that we should probably empty out a shoebox and start putting pennies aside for a shiny set of braces somewhere down the line.

Speaking of orthodontics, there was at least one obvious silver lining in the shark teeth occurrence.  Up to this point, Justin has had a pretty significant underbid that had already prompted a consultation with the orthodontist about a year ago.  And so, one cool thing about how far back his permanent teeth were growing in is that the (new) bottom ones were now perfectly tucked behind his top front teeth.  That is, the underbite seemed to be self correcting. 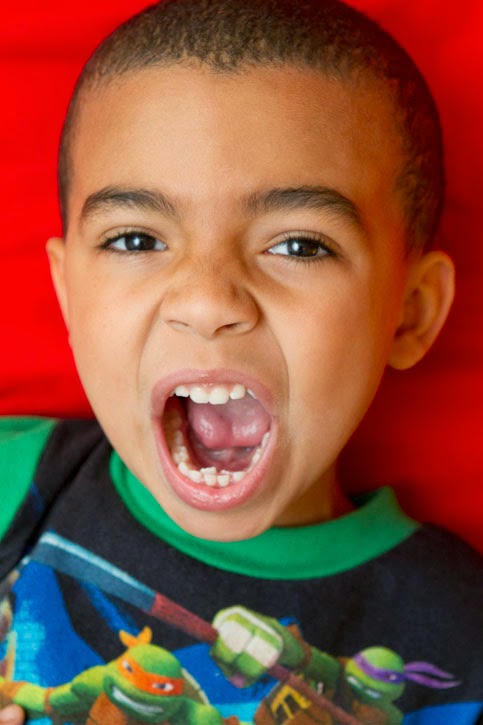 As for the current situation, the first step (after the lie and the google search) was a trip to the orthodontist just to make sure every thing was copacetic.  The verdict: The bottom two front teeth had to go.  So off we went to dentist; who said he'd be glad to extract both teeth for about $150 each.  And that's when the wiggle marathon began.

Step 2: The bribe: I told Justin that I'd pay him $50 per tooth if he got his two teeth out before his extraction appointment, which was about two weeks away.

Step 3: The renegotiation: Venesa told me that $100 was an absurd amount of money for a child who gets excited over a dollar and a quarter (hey, I was just thinking that he'd still be saving me $200).  And so Justin and I sat down at the bargaining table and eventually swapped the cash for the promise of a new set of Ninjago Legos.

Step 4: The work ethic.  We have never (and I mean never) seen our sloth-like son work this hard for anything.  On a scale of one to ten, Justin's pain tolerance is about a negative twelve (remember, this is our highly sensitive child)... but yet he worked that tooth like his life depended on it.  And, unfortunately, to no avail.  Two weeks came and went, and by Monday night, Justin still had twenty two teeth (that's two too many, for those keeping score).  Thus...

Step 5: The plea.  Pull it, mommy, pull it!  For the love of God... I need my legos! Poor child.  If nothing else, he had made one thing clear... this lego thing was serious. So, after two weeks of a steady bagel and apple diet; they tugged, flossed, wiggled, and pried.  But 45 minutes later, Justin went to bed still with 22 teeth.  Which meant that it was time for...

Step 6: The confession. I put him out of his misery and let him know that I had already cancelled the appointment for the dentist.  Given how loose it was, I was content to let at least the first tooth fall out on its own.  And for his efforts, he'd still get some new legos.  But that still left unfinished business: We still had two teeth too many; which brings us to the grand finale.

Step 7:  The extraction.  It was time to go old school with the floss and doorknob trick.  And once again his bravery (or maybe it was the sheer power of lego addiction) floored me.  As I told Venesa, I wasn't even the one whose face was tied to a metal knob, and I was terrified.  Mind you, I personally didn't think the tooth was ready to come out... but I succumbed to the pressure.  And to add insult to injury, it took two door swings because I punked out and didn't push the door hard enough the first time.  Granted, on the first attempt, Justin had no idea what I was about to do; so I had the element of surprise on my side.  But once we needed a second attempt, I just knew he'd run for cover.  But he stood ready; and looked at me as if the say, let 'er rip.  And I did.  At it did.   And for about two seconds neither one of us thought it worked.  I figured that the string had just slipped off the tooth, and that we'd just have to wait it out another week or so until the roots dissolved just a little more.

... Until the blood started gushing from his mouth.  And he smiled the biggest blood dripping lego loving missing tooth smile I'd ever seen, and yelled my tooth is gone! And there is was, still neatly tied to  a string, hanging from the doorknob and ready to be cashed in for a box of plastic snap toys.

One tooth down.  19 to go.  Let's hope that the others are far less dramatic. 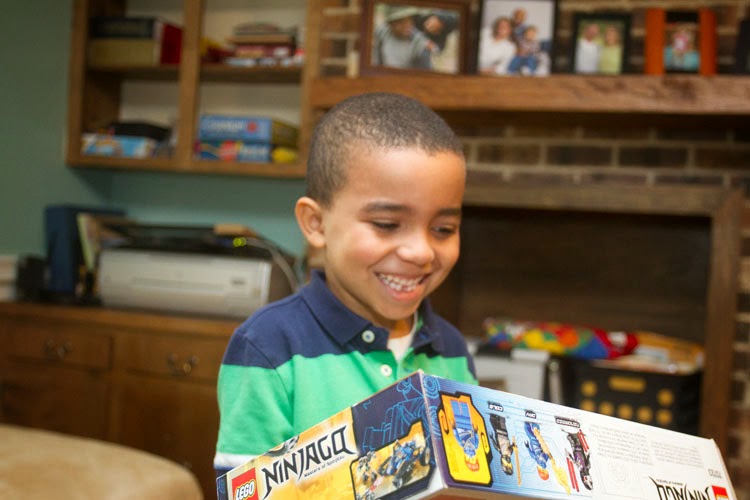 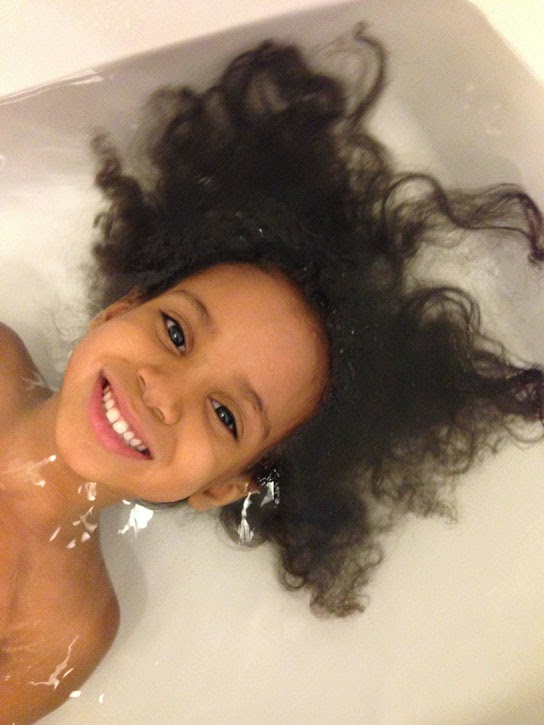 Posted by avidphotog at 9:14 AM No comments: 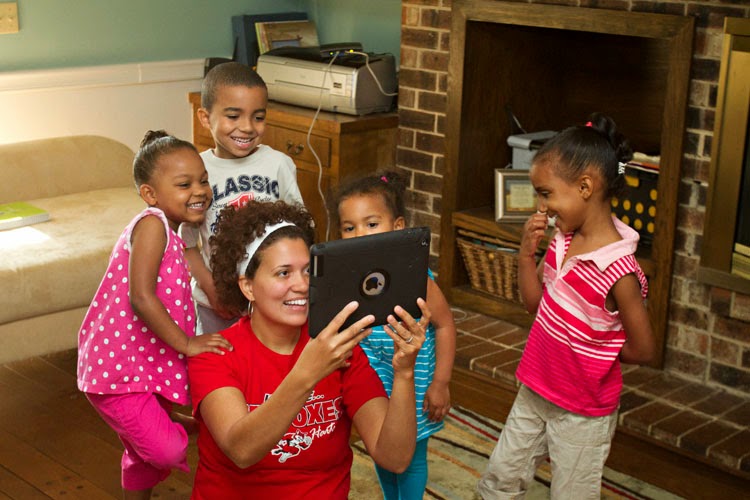 Posted by avidphotog at 8:29 AM No comments: