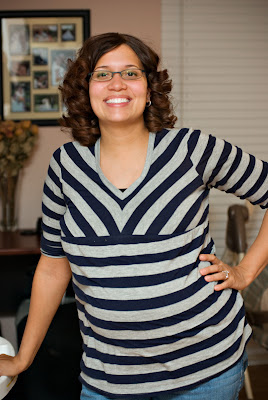 And so it begins... In 2008, Justin was king of the world and had two rooms to call his own: His bedroom and his playroom. Well during Christmas break, to start preparing for baby #2, he was officially evicted from the nursery and the playroom became is new bedroom... to which he looked around at all the toys and said, "you call this a sacrifice?!"... 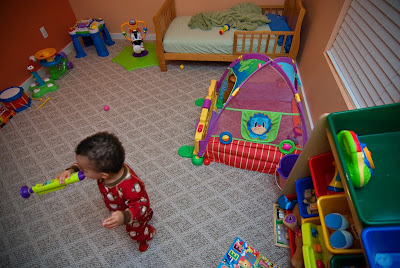 Photo taken during what was supposed to be bedtime.
Long story short, he has been in his toddler bed for about 3 months, and in his new room for about a month and has done great with the transition. In fact, I'd bet that memories of sleeping in the other room (let alone his crib) are very distant memories for him... if he remembers them at all. Just the other night, we let him hang out in his crib for a few minutes just for kicks and I was amused at how out of place he looked in there. Nonetheless, we let him stay in there long enough to read mommy her bedtime story before tucking her in for the night :o) 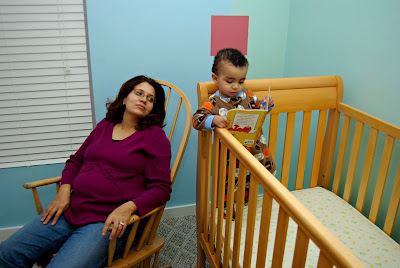 In other news, Justin Alexander turned 19 months old today, still weighs around 22 pounds (2 pounds in 7 months... you would think we didn't feed him), has 12 teeth, and will eat almost anything if you let him dip it in barbecue sauce, polynesian sauce or ketchup. This week he has also made the switch from sippy cup to regular cup...  And it's funny how much such a small thing changed how he looks. I guess drinking from a sippy cup was one of the last few things that made him look like a baby. I look at him now, and it's like, "what's left?"... It sounds so cliche to say they grow up so quickly... but, man... Weren't we just dropping bottles in the warmer for the little runt just a few days ago? Now the two of us are competing for the same cups and table scraps. Time flies. 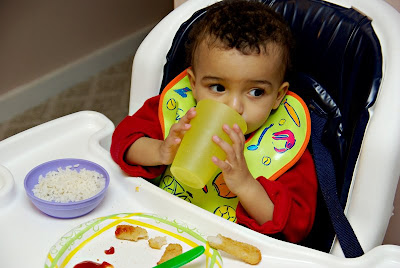 As for mommy and baby #2, between Tums, Emetrol, Zantac and cimetidine, we have amassed an impressive collection of heartburn and nausea medication over the past 7 days. V (27 weeks pregnant) is still having her ups and downs with those symptoms, but I think she found some relief in her diet changes last week (less fried foods and tomato-based items). The baby is still super active... lots of rolling around and position changes... but still nowhere near the internal karate demonstration that Justin put on 22 months ago. As for the other symptoms, the silver lining has been that the heartburn has curbed her appetite which in turn has put her weight gain on pause. But meanwhile I'm still downing chocolate milk like it's going out of style... so we've still gotta figure that one out.
Posted by avidphotog at 10:09 PM No comments:

On January 1, we had the bright idea of taking Justin Alexander to see his first movie... I think he touched every chair in the theatre at least once, used a select few of them as trampolines, sprinted up and down the rows like an olympian, needed a diaper change, finally sat still long enough to down a few kernels of popcorn, whined for about 3 minutes... and passed out. All in the first 20 minutes of the movie. 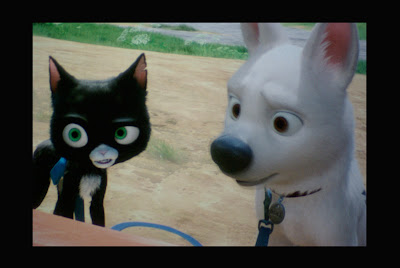 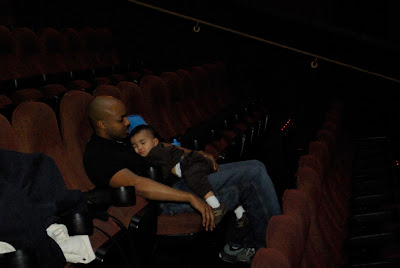 Okay... so maybe he wasn't quite ready. But luckily for us, we were literally the only people in the theater. Otherwise, that story would have been much more interesting! In the end, we got to see what I think was only our second movie since his arrival, and he got a memorable workout. So everyone went home happy.
Posted by avidphotog at 9:24 PM No comments:

This pregnancy hasn't been nearly as kind to me as the first one. For one, there are still 15 weeks still to go, I've already easily surpassed the amount of weight that I gained during the entire first pregnancy. 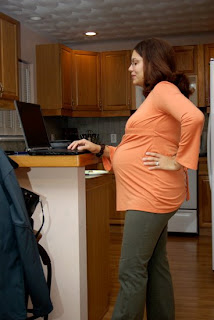 It seems that I can barely see my feet without peeking over my stomach. In fact, this is the heaviest I've ever been. And the cravings haven't helped. I haven't had a love affair with chocolate milk like this since it came with my lunch tray back in 3rd grade. And anyone who knows me knows that ordinarily I don't even like chocolate. And I wish I could say it was just the chocolate milk. But it's been pretty much everything and anything with a reasonable amount of sugar in it. Cereal. Juice. Soda. Raisins. Anything to get my fix!
But other than that, the pregnancy has been good to me. As for my wife (gotcha) she hasn't had the cravings that I've had, but she has shared my weight gain. I'm not sure if I'm allowed to publish this tidbit (ducking the hurling shoe from across the room), but she mentioned a couple of days ago that she's over 20 pounds heavier in this stage of the pregnancy than she was the first time around. She has also suffered her fair share of heartburn over the past week or so, another symptom that wasn't there the first go-round. As for the baby itself, the flutters have finally turned into kicks and jabs, and V and I now find ourselves occasionally just sitting around marveling at the baby's movements. It's actually about the same timeframe that Justin started his slugfest in her tummy, but it's not nearly the intensity that she experienced back then.
Lastly, at 13 1/2 inches from head to heels and about a pound and a half in weight, the baby has pretty much outgrown the fruit and vegetable analogies (though they still go on for weeks on babycenter.com). V has also 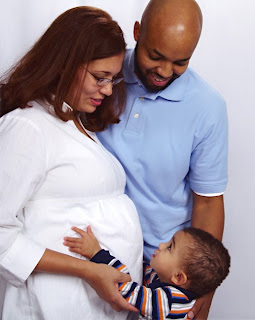 taken to calling the baby "she" despite us not knowing the sex... and as I write this, between the heartburn and the markedly softer kicks and jabs, I'm just now starting to wonder if she is not on to something with her gender bias. (Hmmmm.... ) But either way, the bottom line for now is still the same: we've gotta get moving on coming up with some names!!! At any given moment, we usually have a boy and a girl name and that we are willing to go with "if the baby was born right now"... but the names themselves change every 3 weeks. Oh... and don't let the name be the same as one of V's current students: "We can't name her that! I have a student with that name who doesn't even come to class anymore. And the boy in my class with that name was very disrespectful last week!"... good grief. We've only got 3 months to go. And while that seemed like a lifetime when she was pregnant with Justin, I've gotta feeling that April twentysomething will here before the blink of an eye.
As for the names, whether boy or girl, I say we go with Jerome Jr. and call it a day :o)
Posted by avidphotog at 2:52 PM 6 comments:

As I was going through our pictures and closing the book on 2008, I came across two that I thought I'd share.The first one was taken on my mobile phone sometime in July. If I had to title it, I'd call it "That One"... as in... With all the toys in the store that were at the tip of the shelf and readily available, he just had to have THAT ONE. 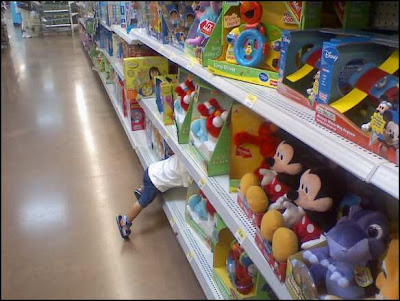 There's a bit of a story behind the second photo. It started with Justin's transition to his toddler bed and his exploration of the new freedom it allowed him. Come naptime or nighttime, we take Justin to his room and tell him "vete en la cama" (get in the bed)... Well, Mr. SmartyPants has come to the conclusion that as long as he is touching the bed, he is technically in the bed and won't get in trouble for being disobedient (good grief... if children are this clever before they can even talk, it's no wonder...). And so with that, the routine would be that we'd stand in the doorway and tell him to get in the bed; and he would stand next to it, put his head on the mattress, and pretend to go to sleep... but of course the second we walked away, he was off and running (usually to play with the stereo buttons). Well, this particular day, we decided to have our version of a Mexican standoff: I cruised by the door enough times so that he couldn't get far from the bed, and he continued to protest getting entirely in the bed. The photo is the end result: 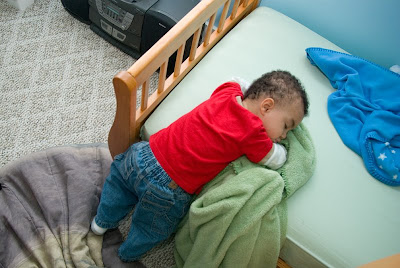 Sleeping standing up. Hilarious. In the end, we had to change the phrase to "vete TOTALMENTE en la cama" (get ALL THE WAY in the bed) in order to remove the ambiguity and put an end to his shenanigans. Fun while it lasted though.

Last but not least, with the addition of November, the photo scrapbook from 2008 is now complete, and I am officially up to date. Enjoy.
Posted by avidphotog at 5:04 AM 2 comments: