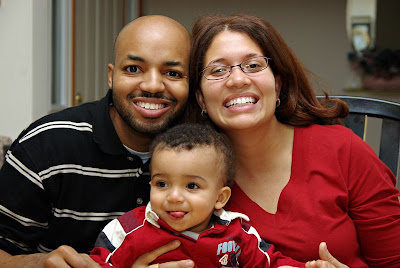 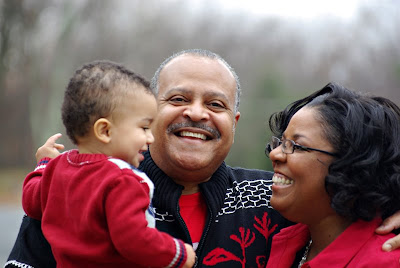 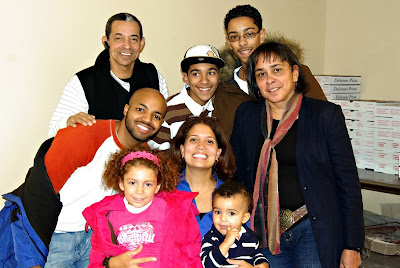 Justin sprouted 4 new teeth in just 3 weeks, including his first molar (upper left, not pictured). That brings the total up to 8 and could very well explain the long string of irritability, cold symptoms, and unbreakable fever that landed us in the doctor's office two Sundays ago. His teeth are apparently on their own timetable (remember he had no teeth at 11 months old) and he is back to his normal self now that all four of the new ones have broken the surface. Most doctors will contend that these symptoms have nothing to do with teething, but it would be hard for us to agree with that at this point. 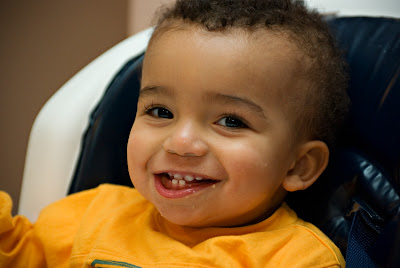 In other toddler milestones, according to BabyCenter.com, our 17 month old should be... becoming much easier to understand now that she often combines pointing with a word or two... and able to undress herself (dressing herself will come much later), brush her teeth without your help, and feed her dolly. She can (also) sort things by color, shape, and type, which makes toys that encourage sorting particularly popular now. If "no" hasn't already become her favorite word, she'll begin using it with a vengeance. She's gradually easing toward one nap each day, which means this is a transition period that's potentially hard on both of you.
Well, 3 outta 7 ain't bad. In fact, in baseball that'll make you a superstar. In no particular order, here's a breakdown of each milestone mentioned on their website this month:
(1) While he is extremely helpful during the dressing / undressing process, he is not yet "able to undress himself"... but we have finally made the switch from dressing him laying down to standing up, so maybe that will encourage more participation. (2) He's also not "feeding his dolly" because I won't let him have one. But he does feed himself full-time... usually starting with a fork (if the food will stick, like mashed potatoes) but he will resort to his fingers when the fork is not fast enough (i.e., all the time). (3) As for brushing his teeth, he has had a love affair with the process for about 6 months already, and now has his own toothbrush. Now if only we can get him to actually brush this teeth and not just his tongue while sucking the toothpaste off. (4) And he's doing pretty good at sorting shapes and colors thanks to his shape cubes and building blocks. 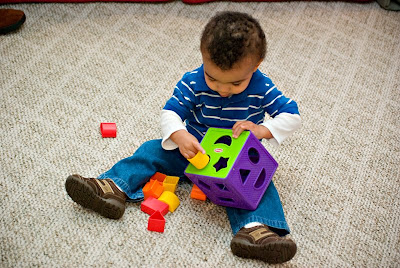 (5) Catching Z's
His sleep patterns have been the same for what seems like forever now. We've tweaked his bedtime here and there (it' now down to about 7:30 pm) but he's still holding steady at about 11 hours of nighttime sleep... But of course as I write this, he is bucking the trend and has been asleep for 12 hours now. As for a nap, he has been consistent with a single 1.5 hour post-lunch nap for about 4 months now, and equally consistent with his wake-up process: wake up / stare at the ceiling / tell a few jokes / crack up until we come get him.
(6) Babytalk
I'd agree that he is pointing more, becoming more expressive, and repeating things we say; but "more easy to understand" might be a stretch. There are a few words that are clear as a bell, but for the others you will definitely need context to figure them out. For example, he will say "salud" (or "bless you"... depending on who you ask) when someone sneezes, and "amen" after grace... but it probably all sounds like "nahnah" to someone that's not his parents.

(7) No Way Jose
While he is not saying "no" yet as they suggest, it's worth mentioning that his temperamental responses to the word "no" have disappeared over time, and probably have been gone for a number of months now. At 12 months, he would throw things (and if he didn't have something to throw, he'd go find something... pick it up... then throw it) when told "no". But now he'll just stop what he's doing without a fuss and move on to the next thing. In short, it's nice to see him grow out of those temper flares before the fabled terrible twos roll around. They were a little too reminiscent his daddy's turbulent years of elementary / junior high school, and I can do without the flashbacks (...is this Cynthia Reyes? Yes, your son has been suspended... again... This time he threw [fill in the blank] at [fill in the blank] and hit him in the head with it... Please come get him... Now.) 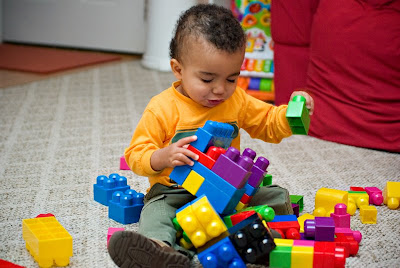 Posted by avidphotog at 7:22 AM No comments:

Justin experienced his first snowfall this morning. Granted, 20 minutes later the sun was back out as if it never happened... but the flurries 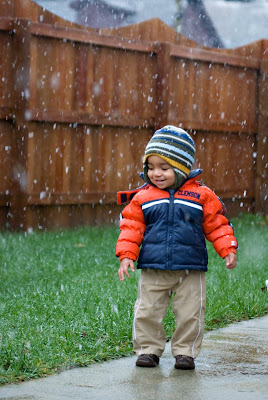 did last long enough for him relish the occasion. At first, his reaction was the same one that he had some months ago we when took him outside to be in the rain for the first time... "okay... so.... why are we out here again?"... However, slowly but surely his facial expression started to change and you could see his sudden acknowledgment that this was a little bit different. And so he just stood there grinning, watching the snow flakes fall and vanish one by one. Very cool moment...

That is... until he snapped out of his stupor, realized that it was brutally cold, his feet were wet and slowly freezing over, and he hadn't eaten breakfast yet. And with that the love affair was over, he began to cry, and it was off to school for both of us.

Fun while it lasted though. 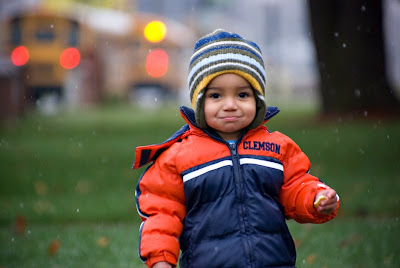 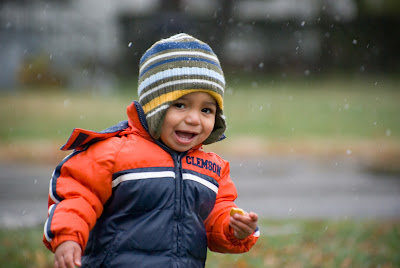 Justin climbed threw himself out of his crib today. Yep. I kid you not. And the irony is that I just told V exactly 2 days ago that I was getting a little concerned (which is daddy talk for I'm worried) about the prospect of 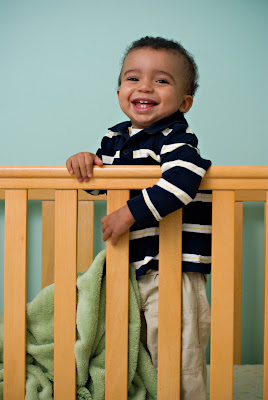 him stacking blankets in an attempt to gain height and leap the wall of this crib. Well, after 16 months, 10 days, and 9 hours of life (i.e, this morning around 7 am) Justin decided to test his limits and essentially launched himself over the edge of his (no longer) safe haven and onto our not-so-cushiony berber carpet. Sitting in my downstairs office space, I heard something crash to the floor in the room above me and knew immediately what it was.
And sure enough I got upstairs and there he was standing next to his toddler bed with tears that obviously from shock and confusion rather than pain. That was at 7:17 am. And by 7:21 he had passed my no-breaks inspection was in front of the television downstairs with a sippy cup; already reverted back to couch potato status and apparently with no memory of his olympic performance just minutes ago. Incredible.
And as much as I joked about it all day... trust me, I'm well aware of the extent to which we dodged the potential of a very serious injury... especially since I'm convinced that he went over head first. And I have yet to figure out how he could have landed and ended up totally unscathed and back on his feet so quickly. With not a single mark, let alone a scratch, bruise or broken bone. So needless to say that his crib days are officially over. While the convenience of the crib was too much to prevent us from switching back and forth from crib to toddler bed, this episode was certainly enough to warrant the immediate and permanent switch to the big-boy furniture. And with that, the crib will now lay dormant until another certain bundle of joy is ready to take residence in April of '09.
So, long story short... God is good!
And Justin Alexander is Absolutely Crazy. 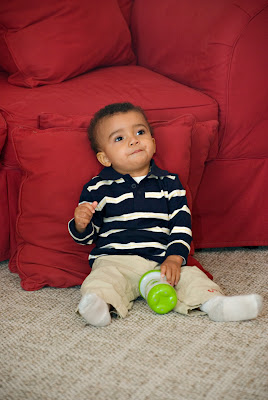