It started with a cough. At least I think it did. The truth is that it's all just a blur now. At the least, I do remember that the progression went something like this: Sometime in January, I caught a cold. The cold became bronchitis. Bronchitis became the flu (or was that vice versa?... I think it was vice versa). Enter February, and Naomi begins her bout with the sniffles. Sniffles became a cough, and the cough became a chorus as Jasmine decided to join in on the fun.

On a Sunday morning in early February, and after going through an absurd amount of OTC meds, we finally decided that enough was enough. The girls and I make the trek to Urgent Care. Diagnosis: Pneumonia times three. Awesome. A round of antibiotics, inhalers and nebulizers for everyone. Even Justin got in on the Albuterol fun, as his asthma apparently flared up just enough for him to join the coughing parade. Oh wait... did I mention that he also contracted pink eye in the midst of our pneumonia? The funny part is, we were running out of places and ways to quarantine each other... from each other. I think Justin spent about 3 days in the playpen (which, at five years old, is hilarious all by itself) while the girls and I were essentially chained to our beds for over a week. 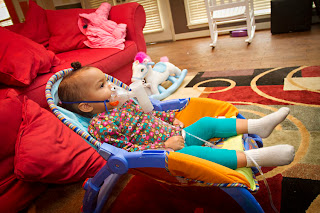 It's fair to say that having pneumonia essentially erased an entire month from my life. You may as well just rip the February, 2013, page right out of the calendar. It was awful. For the first time ever, I understood what it felt like to be perpetually ill, and I can honestly say that I wish that on no one. Ever. Talk about taking things for granted. The inability to ... simply breath. Indescribable. And as if the coughing, high fevers, and constant gasps for air weren't enough, throw in some unlikely side effects of the antibiotic (delusions, hallucinations)... and you have officially crossed over from the common cold to the twilight zone.

Finally, the month of March rolled around, and the antibiotics finally began to prove their worth. I learned the hard way that the lung is a slow healer. It took well beyond the 5-day course of antibiotics for any of us to even resemble being at 100%. However, once when it came, relief was a God send.

Of course, in the midst of all of this illness was Venesa's dad and his tour of South Carolina's medical facilities (from Charleston to the Greenville ER, to the ICU, and back to Charleston again... by plane, no less... to Greenville ICU, to Hospice)... and his eventual passing on March 6. By then, the kids and I were all safely on the mend and on our way back to Greenville for the homegoing service. And given that our children have likely consumed their body weight in chicken nuggets and fries over the past few years, who would've thought that a trip through the McDonald's drive-thru would have sparked the next unraveling. The night before the funeral: Naomi and Justin. Food poisoning. Nice. If it weren't against the laws of physics, I'd say that each of them threw up more food than they ate over the previous 7 days. From midnight to 6 am, it was a constant parade to the bathroom (well... for the handful of times that we actually made it to the bathroom). Talk about having a long night before a long day. I think this is the point where the whole thing got comical. I mean, at some point you just have to laugh at the absurdity of it all. And as they say on those late night infomercials... But wait... there's more!

Fast forward 3 days. At this point, I'm already back in Hartsville, while Venesa and the kids are still in Greenville wrapping things up and preparing to come home for the first time in about 2 weeks. As she's gathering clothes and packing bags, what else would hit her besides a high fever and body aches.
Hi, I'm the flu. How are ya?

Too sick to drive, her return home was postponed a couple of days. But upon her arrival, she was clearly feeling much better and things were looking up for our family. Well... except for Naomi. Even though she'd been coughing for a while, we had not thought much of it. We just figured it was the last of the pneumonia working it's way out. That line of thinking sounded pretty reasonable... until the coughing never went away. And two Thursday's ago, she spiked a fever of 104 degrees. And just like that, we were off to the races again. We went back to the doctor, who apparently should be on speed dial by now. Honestly, I can't even remember the diagnosis right now (mental blur), but at this point the exact illness doesn't even matter. We were just begging to be medicated. All I remember is that we came home with a second 5-day round of antibiotics. Yet and still, she ran a brutal fever for five of the next six nights, and the cough never went away. Speed dial. Hello... doctor's office?

Earlier this week (don't ask me what day... I haven't a clue) we were back at the pediatrician's office. And finally... here's where the story goes from being ordinary... to epic... to full blown legendary: As a standard procedure, the doctor tested for both strands of the flu (A and B) to determine which type she had, or I guess to see if she even had it at all. Well, she had both. The shockingly dumbfounded look on the doctor's face pretty much made it clear that he'd never seen this before. Type A followed by B a few weeks or months later? Sure. Vice versa? Definitely. But both at the same time? You, my friend, have hit the jackpot. Well, let's check her ears just to be thorough. Ear infection. Left side. Brilliant.

So here we are. One big petri dish of viruses. We're obviously hoping this is the last page of this chapter. As for why all of this misfortune has suddenly fallen upon us. If nothing else, in the midst of so much uncertainty, at least that answer is obvious:

Two months prior to all of this, we had the (not so) bright idea of switching from our standard health insurance plan to the high deductible insurance plan. The thinking behind the switch went something like this: Sure, on this new plan, you pay 100% of the first $6000 of your health care expenses from Jan 1 to Dec 31; which seems like a humungous number. But after doing the calculations from last year, dishing out the higher premiums didn't really work out for us. Between the difference in premiums between the two policies, and how little the insurance policy pays out even on the low-deductible plan; this would translate to incredible savings for us. After all (... pause for the kiss of death... ) we're a really healthy family! It should be easy for us to stay out of the hospital.

I guess I forgot to knock on wood.
Posted by avidphotog at 4:01 AM No comments:

He wore many hats throughout his career, from shoe salesman to shipping and receiving coordinator; then spent the last 15 years of his career at Agilysys in Taylors as their facilities manager. However, most would probably give him the title of "evangelist" because it was his mission to spread the gospel of God's redeeming grace to everyone he came across - whether that be in the grocery store, on the basketball court or in a homeless shelter. He loved sharing the Word and will forever be remembered for his humility and appreciation of the ultimate sacrifice of God's one and only son.

In addition to sharing the gospel, Ralph enjoyed dancing to salsa music and playing basketball. He especially took pride in the fact that he could beat almost any younger man on the courts - and then of course, after he beat them, true to his character, he would hand them a gospel track and tell them about the Lord.

We will deeply miss you, but we know we will see you again soon!
Posted by avidphotog at 12:07 AM 1 comment: