Spring intramural time! Given the choices of baseball and soccer, Jasmine chose soccer and Justin initially chose baseball... until I explained to him that baseball was more than just hitting the ball with the bat like we do in the backyard.  "Every now and then, someone's gonna throw the ball at you... and they're gonna expect you to catch it."  That conversation pretty much brought Justin's baseball dreams to a screeching halt.


Yet and still, on the day of tryouts, we somehow talked Justin into giving soccer a second chance.  "Run the obstacle course with your sister.  If you like it, we'll sign you up.  If not, then hey, at least you tried."  And with that, we now had two contestants up and running.  Five stations with five different coaches outfitted with stopwatches and clipboards. The goal of the day was to place the kids on the appropriate team based on their speed, skill level, etc. 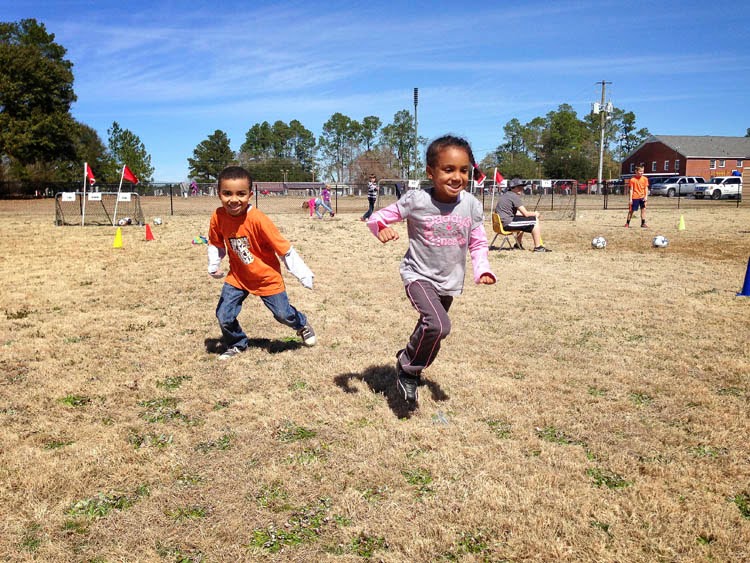 First up was jasmine. And as she took off, weaving the ball through the cones, the coach shouted, "man! This girl is good... She's gonna be a pro!"   Next up was Justin. And before he even made it to the third cone, the coach turned to me and said, "so she's the professional athlete... and he's gonna be the doctor, huh?"

I laughed for the rest of the day. The truth is the truth, and evidently it doesn't take very long to sniff it out.  But to give credit where it's due, Justin did outrun and outscore his sister in all five trails.  So he still has bragging rights in the house.  But I don't think he was winning any awards in the 6-year-old boy category.  And that's just fine with me, because you have to know your child... and personally I count it a victory that our shy ultra-sensitive Care Bear watching lego-obsessed brainiac of a child was even out there, giving it his all.  Bring on the competition!  If we don't beat 'em in soccer, we'll beat 'em in the math, reading, and bible verse competition.
Posted by avidphotog at 9:07 PM No comments:

So, evidently it wasn't enough for my face to be splashed bigger than life on the school website.
Don't jump the turnstile yet.  We present to you... you're favorite token.

Welcome to the Powerhouse.

Posted by avidphotog at 10:05 PM No comments: