An email from a new friend on July 29...
______________
Jerome,
My family and I shared Baskins Creek Falls with you last week. We had a great week in the mountains, visiting a few other waterfalls off the Blue Ridge Parkway (Skinny Dip Falls, a beautiful spot, and the more popular Second Falls just down the road at the Graveyard Fields overlook). You should check out Skinny Dip Falls, its at mile marker 417. That was our third trip to Baskins. We stopped at the cemetary on the way back, and had a hard hike back to the car, very hot and steeper than I remember!

I checked out your website and thoroughly enjoyed your nature photos, especially the waterfalls. I hope you get a chance to send us some pics...
_________________ 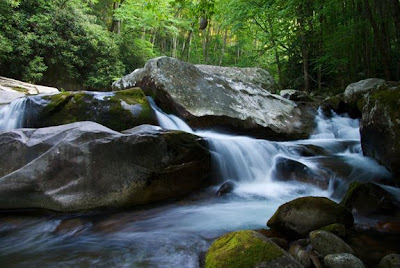 Will -
Got your email! Somehow it got lost in the shuffle, so I apologize for the long delay. I've been a bit busy wrapping up summer travel, a recent wedding shoot, and prepping for the upcoming school year. In fact, only today have I been able to take my first good look through the photos from that trip. Right after the trip I posted about 10 shots that stood out to me right off the bat, and after spending this morning at the computer I was able to come up with about 3 dozen in all that I thought were worth posting. I've also included 4 shots of your family under Baskin Falls. Here's the link to the gallery. I'll keep them downloadable for a few days, after which you can contact me if you still need copies of them.

And thanks again for the veggie burgers and orange slices. They were worth their weight in gold after a few days of hiking on freeze-dried rations. Speaking of hikes, it sounds like the hike back was treacherous. If you should find yourself back there, don't forget to try the alternate route I mentioned. It's a bit more up and down, but avoids legging out any intense elevation drops/gains in either direction. It turns out that you'll pass a cemetery no matter which route you choose, and the mileage is just about equal either way.
Happy trails! 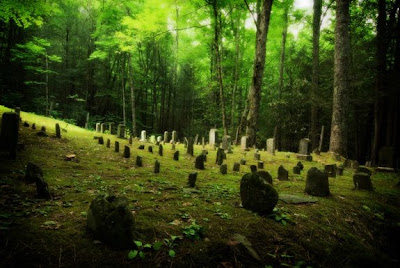 Posted by avidphotog at 10:15 PM No comments: 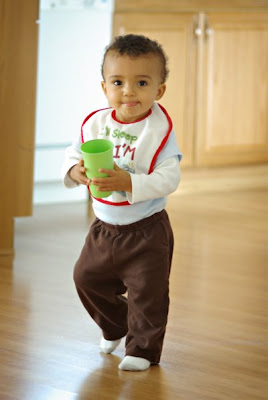 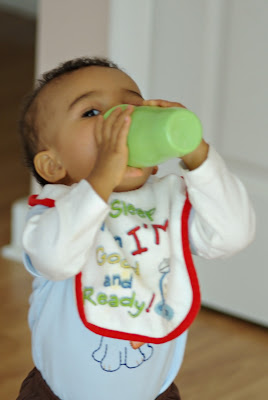 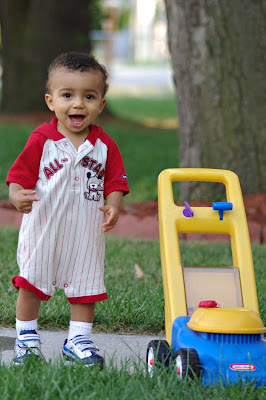 We're still working on the cup thing (somebody hand me a mop...) but he's got the mowing thing down to a science. Now if we only we can convince mommy to let him hold the weed-wacker...
Posted by avidphotog at 10:00 PM No comments:

Sometimes I honestly believe that our UPS delivery guy can't read. Hellooooo... read the label, buddy! Wrong address again. I tell you, these delivery guys are getting younger every day. 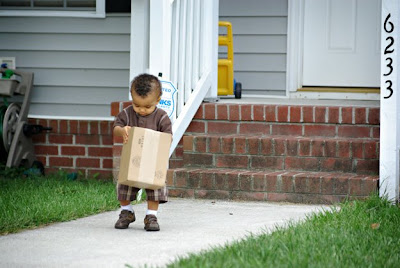 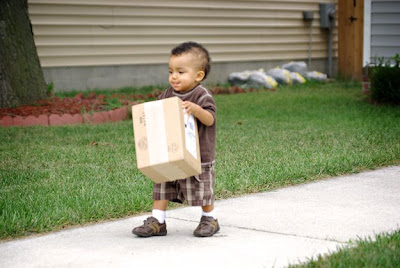 What can brown do for you? 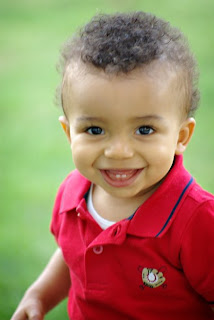 milestones. I'm honestly baffled at how far he has come in such a short span of time and was convinced that it was due to all of the traveling we did this summer (so much exposure to new places, people, things, etc.) But V was quick to mention that based on what she has read, in addition to him being a human sponge, this is usually how it is at this stage. Between 12 and 24 months, the progress comes at lighting speed... quick enough to register, but leaving me with no chance to document even a fraction of it. But because I know how much of his first 13 months I've already forgotten (it's amazing how the memories shift to make room for new ones)... I will still take a shot at documenting what our little tike has been up to lately. At 13 months, 2 weeks, and 5 days old, Justin...
• still has 2 teeth.

• is every bit of a toddler now, as he moves through the house a what seems like the speed of light.

• apparently is comfortable with his weight since he has been exactly 20 pounds for about 3 months now.
• is getting LOUDER every day.

• is slowly dwindling down from two naps a day to one

• no longer eats baby food. He has been eating "real food" for months but officially stopped eating his occasional jar of baby food this week. On the other hand, I think his mommy jumped a few rungs on the food ladder because I'm not sure if tilapia and crab legs are on the baby food pyramid... but he love's 'em.

• dances at even the hint of music

• understands communication. I'm not sure how to explain this one, but this is probably one of the coolest milestones to me. Justin is at the point to where he will ask questions, respond to questions, respond to his name, and pretty much carry a civil conversation with anyone willing to pretend that they understand his language. Granted, he still only knows two words (mama, dada), so everything else is still guttural at best... but his intonations and intent to communicate questions, thoughts, and desires is obvious. His ability to convey the things he wants, likes, and dislike is admirable and unmistakable. We've just got to get his vocabulary going to round things out.

• knows how to use two sign language words; "hambre" (hungry) and "mas" (more). We're working on a sign for sleepy (i.e., "night night")... but it's probably pointless because I don't think he'd ever use it. He'd rather pass out in the middle of the floor than be taken to his crib to sleep.

• has about a dozen words or phrases to which he'll properly and consistently respond. The ones that quickly come to mind are..
ARRIBA (lifts arms to get picked up)
TOMA (opens wide to eat)
NO WAY JOSE (shakes head emphatically)
DONDE ESTA LOS OJOS? (points to eyes)
BESITO / BYE BYE (will blow you a kiss with either or both hands)
PEE PEE (grabs the front of his diaper... no, we're not perverted. Just getting an early jump on potty training)
• is finally starting to take an interest in books and being read to.

• is becoming more emphatic about feeding himself and holding his own spoon... which is a good thing except when you don't have 30 minutes to wait for him to finish a meal.

• and last but not least... is growing up way too fast for his adoring parents. 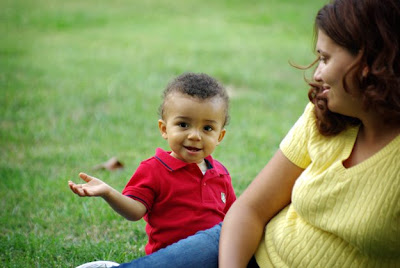 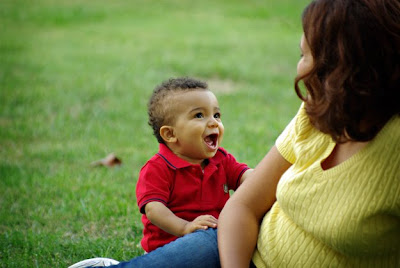 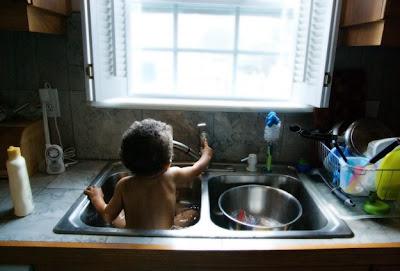 oh... and evidently he's not too big to get thrown in the kitchen
sink for a spur of the moment quick-rinse.
Posted by avidphotog at 9:51 PM 1 comment:

Part of our trip to SC last month included an overnight jaunt to spend time with the Lloyds and their newest addition, Hayden Joshua. Heath and Tasha, it was a pleasure catching up with you. Hey Heath, who knew we'd have so much to talk about? Your family is awesome and I look forward to another opportunity to catch up. Also, thanks for the recipe for that casserole you guys prepared. V went to work on it today and I'm diving into a second plate of it as I type this entry. Delicious stuff.
And finally, as promised, I finally uploaded the pictures I took of you guys during our visit. Sorry it took so long to get 'em to you but if I had a dollar for every undone item on my July to-do list...
Anyway, here's the link. The password is baby123, by the way. Downloading should be easy (just mouse over the photo and click save). Enjoy. 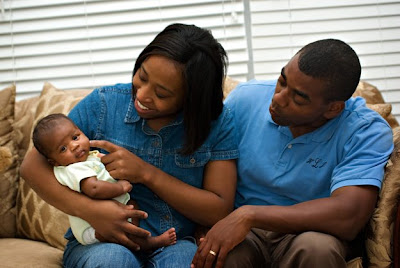 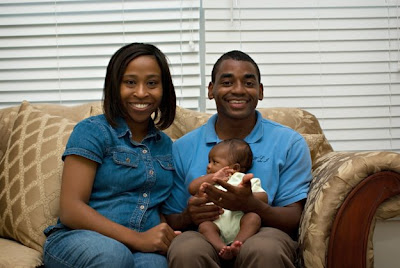 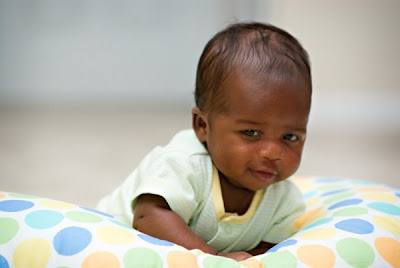 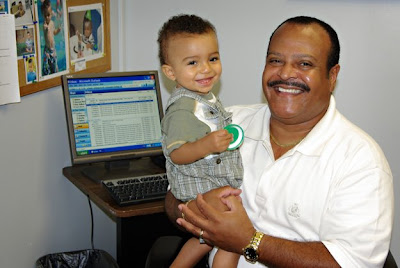 It took a few months but after stops in 3 different states, Justin
has now made cameos at the job sites of all 4 grandparents.
It has almost been a week since our return from Pennsylvania, but I suppose we needed that much time just to get acquainted with our home again. And now that we look up, what do you know, the summer is over... at least from a teacher's perspective. Six more days before I report back to the University, Justin reports back to daycare, and V has one more week beyond that before she reports back as well.
But all is not lost! Though we spent more on gas this summer than I care to mention, we all had a great time every stop of the way and again want to thank all of our family and friends for spending so much time with us. As for our last stop, most memorably V and I endured our first night away from Justin as we booked a hotel and ventured to Manhattan for a performance of The Fantasticks (a pretty funny broadway musical with a small cast of 8) and an encore visit to Carmine's.
As for now, expect a few more entries in the next week or so as I try to get caught up on things before having to grab a math textbook and a box of chalk again. Along those lines, V has already gotten a jump on things by loading her photos from the SC/GA part of our summer onto her Facebook account. She's got five different galleries: PA/NJ trip, Stacy's shower, the Lloyds, dinner at Abuela's, and the Elliot shower. Be sure to check 'em out when you can. 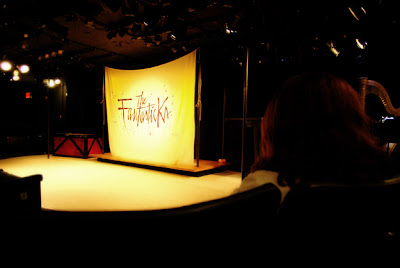 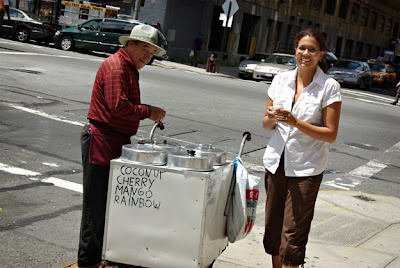