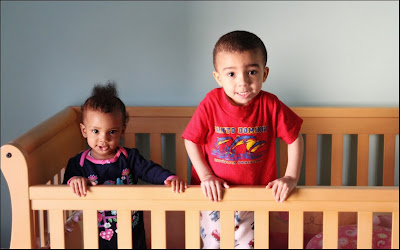 Justin's Addendum
Ok... so I didn't expect this to take 4 entries, but I guess that's what happens when you fall behind. Anyway, just a couple of things that I forgot. For one, somewhere between 2 and 2.5 Justin learned his left from right. At first I wasn't sure if it was pure luck (he's got a 50/50 shot after all) but over time he's been pretty consistent with it. Ask him for his left hand or foot (in spanish) and he doesn't even hesitate to give you the correct one (unless he's being a wise-guy, which is 83% of the time). I find this pretty cool because I remember personally taking FOREVER for this concept to stick. As for more recent events, just this week he finally switched from referring to himself in the third person to the first person. Overnight, phrases like "it's Justin's turn!" became "it's my turn!"... etc. He still goes back and forth a bit (you'll still hear him say "Justin do it" or "libro de Justin" versus the equivalent statements with "I" and "my") but the transition period is definitely in effect. And speaking of transition, this monster of an update is now complete. Back to our regular programming.
Posted by avidphotog at 9:56 AM 1 comment:

Justin Milestones XXV
Grandma asked me a few weeks ago, "Does Justin still get milestone updates on the blog?"...(he hasn't had one since November) to which the answer is, "I guess so"... but as toddlers progress, milestones do get more difficult to document. There are no more big splashes (walking, talking, etc.). Things happen in such a subtle fashion that his progress is easy to overlook. His understanding, for example, has just inched forward every day... to where we finally have to come to grips 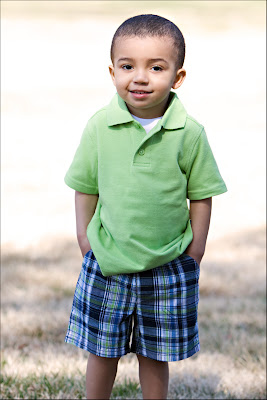 with the fact that he understands pretty much everything we say around him. And it doesn't help that he's bilingual because we can't even switch languages (we joke about picking up German just so we can talk in code). So he's "all up in the conversation" pretty much everyday. V asked me the other day what we should have for dinner, and Justin responded (in spanish), "yeah I'm hungry." Or I'll say to V, I need to leave for work soon, to which he'll respond "Si, daddy go bye bye now. Adios daddy." Funny stuff... until you're in the drive-thru ordering him a hamburger and he just about has a heart attack because he wants you to change it to chicken nuggets (yep, that was 2 days ago).


One of his first phrases months ago was "no want it!" (more like "nowunnet") but now he can tell you that he doesn't want it and tell you what he wants instead; not to mention what he had for breakfast and what he wants for dinner. Exactly when that change happened, I have no clue.

As for other skills, somewhere between 2 and 2.5, he learned to count to 20 in spanish and english and finally got his primary colors down pat. Since then, he has added spelling to his repertoire (B-A-T, J-U-S-T-I-N, D-O-G, and S-T-O-P), knows our last name (and calls us by it... so now I'm Daddy Reyes) and can follow multi-step instructions pretty well (e.g., go upstairs, put this in the hamper, and turn out the light in your room). Speaking of lights, he is obviously growing because I noticed him turning the light on without his pasito (little step stool) the other day. That caught me off-guard, and was a reminder that it's probably time to take the ruler out and measure him again. As for weight, he now resides somewhere between 27 and 28 pounds. Progress, but definitely still a lightweight. 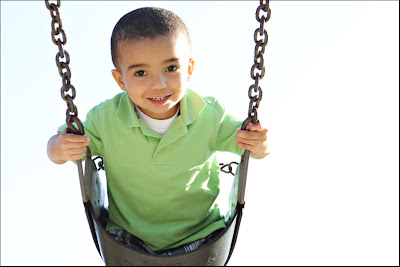 In other news, he's also getting luke-warm on Elmo (finally) and starting to migrate towards spider-man and mickey mouse. And in the sleep department, he and Jasmine both are down to one nap a day, which lasts anywhere from 1 to 2 hours (3 on a really good day) depending on how much we've worn him out in the morning hours. And 3 out of 7 mornings a week, he's guaranteed to sleepwalk his way into our bed somewhere between 6 and 7 am. At that point he'll sleep for another 2 hours or so. As for bedtime stories, there's the usual Clifford, Curious George, Disney books, etc.; but as of a couple of months ago we also started him on a routine of ending with a book about God. It's incredible how much of that stuff he retains. Ask him 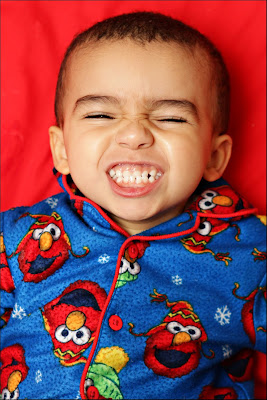 about it, and he'll tell you all about how Adam and Eve "got timeout" for eating "la fruta"... or how Daniel prays all the time... or how Noah built a boat and was obedient. In all, I think he may know more bible stories than daddy (but I'm working on it).


Last but not least, V has been quick to point out that sometime over the past 3 months, Justin has become (as she puts it) "all boy." The days of passively playing with toys have quickly turned to a nonstop circus of jumps, stomps, climbs, kicks, rolls, and anything else rambunctious that you can think of. I can see why so many boys are quickly misdiagnosed by woolgathering parents as having ADD and things of the like... because he is just a ball of energy: content to wrestle, romp, and rumble pretty much 24 hours a day. And if you add a little dirt to the mix, you my friend, have made his day. Like I said, all boy.


I'm sure I'm missing about 25 other things, but that's all I can think of for now. In all, as we creep our way towards his 3rd birthday, I can firmly say that his "terrible" twos have been everything but that. What a great year he has had.
Posted by avidphotog at 10:27 AM 3 comments: 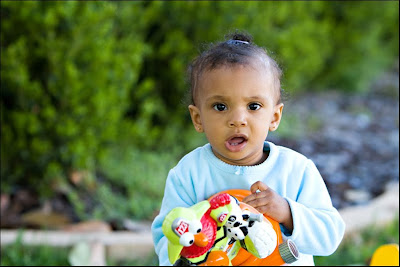 Jasmine's Addendum
3 days later, I now realize a few more things I should've mentioned in this update about Jasmine Olivia. She has two full teeth, has ditched her bottles for sippy cups, and her favorite pastime around the house is putting and taking things in and out of tupperware, cups, or any other makeshift shopping bag she can find. We also joke between us about her maternal nature since (given a wipe or paper towel) she will also spend the day cleaning floors and furniture. She also bathes with her brother 1/2 the time and will grab his wash cloth and try to bathe him too if he's patient enough (this is usually met with a lot of hand swatting and a chorus of "No Wahmin... Dop It!"). In all I find it hilarious because he is almost 3 and we can't even get him to bathe himself, but yet she'll scrub him down like she was his mother. I guess boys will be boys... and girls will be mothers and wives.
Posted by avidphotog at 7:54 AM 1 comment: 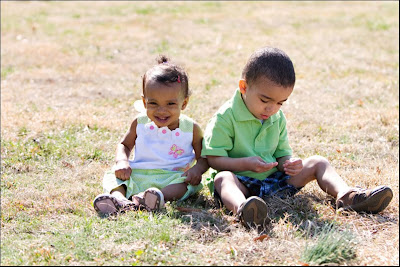 Happy Spring 2010! And with jam-packed parks, free italian ices, and a high of 77 degrees; spring certainly started with a bang this year. Just 3 days ago Jasmine also turned 11 months old. Wow... we'll all be a year older since she was born. Seems like yesterday.
Speaking of yesterday, here are a few milestone updates for both of our toddlers; coupled with some photos from yesterday's visit to the botanical garden.
Jazzy Stones XIII
While she won't be in anybody's marathon anytime soon, I guess what Jasmine Olivia does now can be considered running. Or maybe it's a speed walk. Either way, she hustles; intent not to be left behind by anybody changing direction or location too quickly. It's funny how quickly we leave stages behind, because it has only been a few weeks (3 or 4?) since she was crawling and now I can't even picture her doing it [it would definitely look strange]. 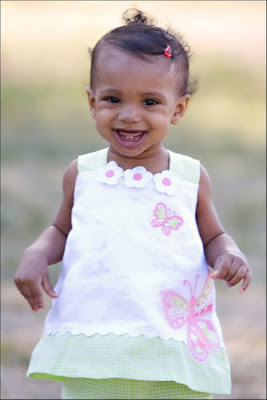 As I mentioned last time, she also left the breast-milk behind when she started walking; and so mommy officially has about 4 hours of her day back since the pumping and feeding sessions are a thing of the past. She (Jasmine, not mommy) is also about 50 / 50 with jar food and table food; but given that we're low on jar food at the moment I've got a feeling that the switch to all table food isn't too far away.
At some point over the past two months, she learned to wave goodbye, blow kisses (which she does with a very emphatic "mwah"), and go to sleep without crying (finally!). She also loves to climb, has made it 1/2 way up the stairs at least twice (a liberty that Justin never even came close to having), and shakes her head "no" to mimic you when reprimanded. Also, her speech is uncanny. It's funny because I remember writing about how non-commutative she was early on... and just like that she seems to have caught up to (if not passed) where Justin was at 11 months. It's not that she'll say much that's intelligible on her own (dada, justin, and ut-oh are pretty much it)... but her ability to repeat what you say (and to do so clearly) still makes me say wow every time. Even before Justin was born, I was warned about the differences between speech development between boys and girls; but it's still amusing to see it for myself.
As a funny testament to how different our two toddlers are, if you call Justin over to be reprimanded he will sheepishly drop what he's doing and come to accept his punishment. His sister on the other hand will run away from you in a heartbeat with the biggest grin on her face while you're yelling the whole time, telling her to "get over here." I've got a feeling that Justin is going to be framed for a lot of crimes in the 10 years to come.
As much as they love each other, Justin and Jasmine have also already engaged in the perils of sibling rivalry (which is a nice way to say they fight a lot). It's funny to see the two of them going back and forth, slapping each others arms, hands and wrists; her grunting and screaming and him hollering "no jasmine, it's mine!"... Wow. Sibling rivalry gets off to a head start, I suppose. And I won't say who the biggest bully is
As for Justin... (to be continued) 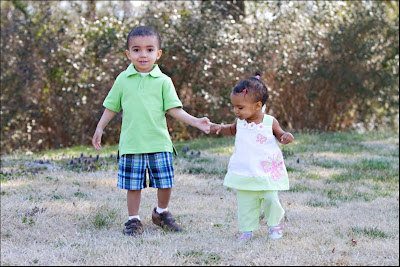 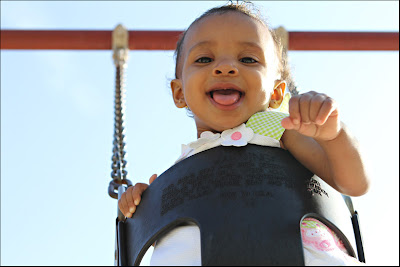 Posted by avidphotog at 6:05 AM No comments:

10 days into March and we're still without a blog entry, but such is life sometimes. Truth be told, we've had a lot of ordinary days of late, and those don't lead to much to write about unless you want to discuss temper tantrums, dirty diapers, or strategies to maximize output on minimum sleep. As for the not-so-ordinary, the last 2 weeks have also seen the grandparents come to town to attend Jasmine's dedication; and Justin's apparent graduation from flight school (either that or he went to the Air and Space museum). Besides that... nothing doin'. 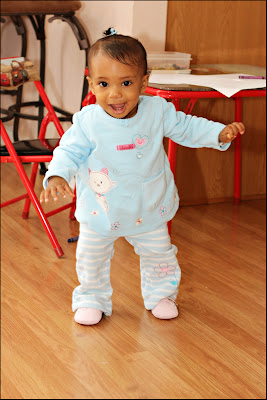 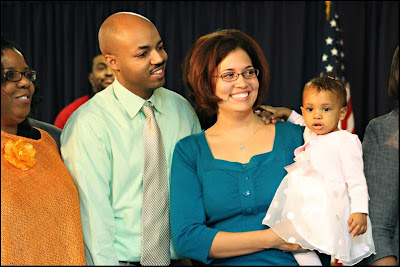 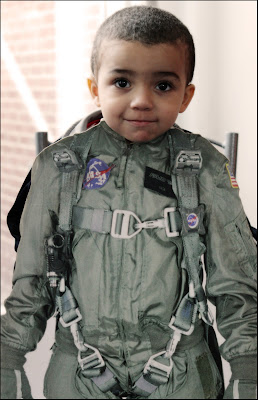 Posted by avidphotog at 8:43 PM No comments: