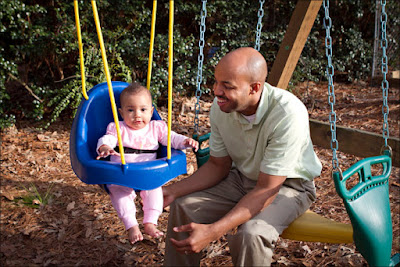 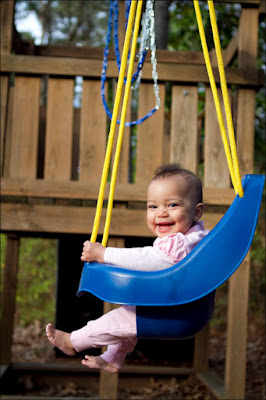 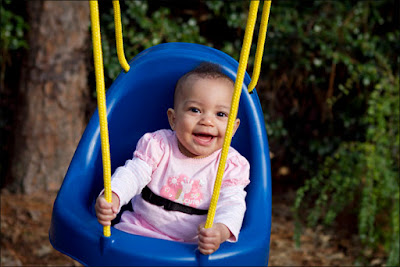 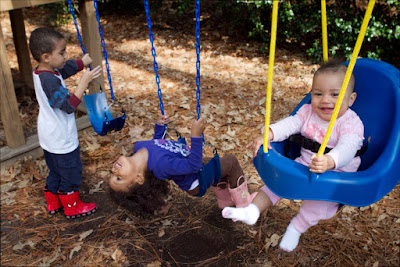 Well Nourished
In other news, Naomi has graduated to supplementing her breast milk regiment with a bowl of baby cereal and about 3 or 4 jars of baby food a day... and that's a good thing since (thanks to some very kind donations) I think we have enough baby food to last her until she's in the 5th grade. Her overnight feedings are still a crapshoot. She slept from 9 til 4:30 last night... but may very well wake up twice to feed tonight, and not at all the next night. But either way, I think her lack of routine has become routine (if that makes any sense) and so I think we've pretty much adjusted to it by now. Stat-wise, we're looking at 24.5" and 15 lbs 9 oz.

Mobility
Despite being able to (commando) crawl from one side of the room to the other, the ability to sit up unassisted has still escaped her to this point. It just seems a little backwards (crawling before sitting up) but it could very well be what the other two did as well. I honestly can't remember and am simply too lazy to look it up right now. In any event, I do know this much: She's at least got Justin beat in the mobility category. It wasn't until 7 months that he was rolling over both ways and commando crawling. Naomi had both of those crossed off her checklist at 5 months. On the other hand, we're not going to bring Jasmine Olivia into the conversation... because every time I think of her flying through the house in her walker at 4-months old, all I can do is shake my head. She was like a little olympic baby or something. Of course, all of these mini-milestones mean little-to-nothing (more like nothing) in the bigger scheme of things... but it's still fun to compare. They're just constant reminders of the uniqueness of each child. It's a beautiful thing.

Don't Leave Me!
As expected around 6 months, separation anxiety has kicked into high gear... but the good news is that we've got twice the number of warm bodies in the house to put around Naomi than we did with the first child; and so that usually helps to buy us some time. I've even stooped to putting her in front of the dog a time or two. Hey... say what you want, but I think I remember it buying me at least 5 minutes to do whatever task was before me (dinner? potty break for the other two? who knows what it was). And if lazy dog Tasha moved around a bit more, it could've bought me ten minutes. Any parent of multiple kids can tell you... sometimes those extra 5 minutes constitute that very thin line between a good, fun day with the kids... and involuntary admission to the insane asylum.
Posted by avidphotog at 10:55 PM No comments:

How We Roll, pt II

The second best part of my job is the opportunity I have to personally create and deliver unique opportunities for students to learn (and become excited about) math and science. The most recent example of this was the organic chemistry workshop that I hosted this past Saturday for a dozen high school students who were ready to be awed by some chemistry (and no, I don't know much about chemistry... but I know how to hire someone who does). Anyhow, this particular workshop called for a morning split between two locations (the local high school and the local college just 4 blocks away)... which brings us to the point of this blog entry and the new job title that I can add to my resume: Mr. Bus Driver.
Of course, I first had to complete my bus orientation (self-guided, no less). And like everything else in our household, it couldn't be anything less than a family affair. Hop in kiddos. Enjoy the ride. No chewing gum. Watch your step. And keep all of your body parts IN the bus. 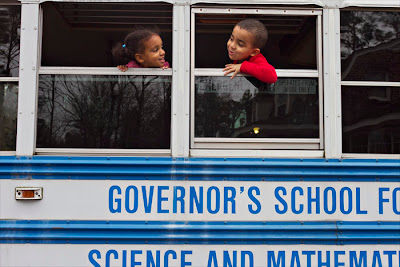 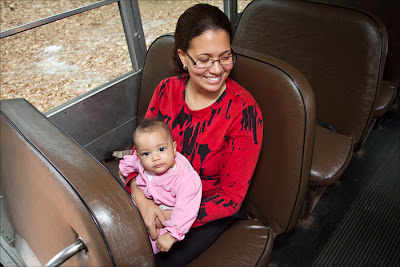 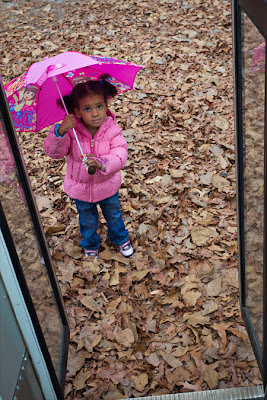 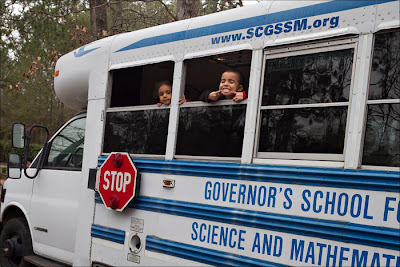 Wow... only one entry in the entire month of February. Besides being our all-time low (yes, I looked it up... the previous low was 3); I think that low number pretty much summarizes the extent to which our February schedule politely and unquestionable kicked our behinds. Well... if nothing else I can say that leap day is about to pay off in 2012: Twenty-four more hours to resuscitate the blog before the next month rolls around. Welcome to the leap day blog cram.
[... clear!]
What you missed: Mommy had a birthday, Daddy got baptized, Naomi perfected the commando crawl, Jasmine fell on her face (and was rewarded with a grayish-brown tooth and a visit to the dentist), Justin stumped daddy with a math question (is zero even or odd?... or neither?), and the family celebrated Valentine's day on February 22 and reaped the benefits of 90% discounts on all things hearted and chocolate. Welcome to our world.
Posted by avidphotog at 6:31 AM 1 comment:

As usual, no blog posts for a couple of weeks means that things have gotten a little bit hectic for our household. Things have picked up at work, everyone at home has taken their turn at being sick (Jasmine won the grand prize with a staph infection that took 3 weeks to subside), and mommy is about to get a stretch of I-26 named after her to commemorate her consecutive weekend passages to Greenville and back. Nothing major. Just the typical turbulence we all hit every now and then as life takes flight. Fasten your seat beats and adjust your tray tables. My hope is that we'll be coming in for a landing sooner than later. 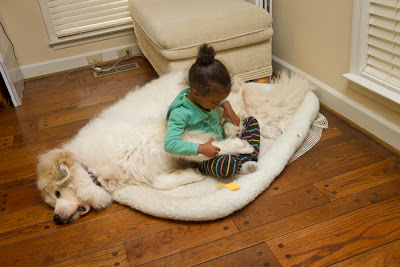 Imagination: Jasmine decided that Tasha's legs made a great seatbelt.
And there's no better steering wheel than a yellow plastic spatula.
Posted by avidphotog at 7:18 AM No comments: